gRPC - The Framework for the future

Application programming interfaces — more commonly known as APIs — are at the heart of the most successful digital companies. Several organizations, from tech giants to startups, owe their business development to APIs. Acting as a communication medium between systems, APIs make a range of web products and mobile apps accessible to millions of users across the Internet. So, choosing the right technology to provide an API for your app is crucial. REST API has dominated the market for many years, and it uses HTTP/1 as its underlying transport protocol. This article introduces you to gRPC, which uses HTTP/2 as its underlying transport protocol. It provides better features, performance, and security over HTTP/1. Let’s explore gRPC which promises to solve issues other design styles weren’t fully able to.

gRPC is an open-source high-performance RPC (Remote Procedure Call) technology for implementing RPC APIs that uses HTTP/2 as its underlying transport protocol. At the application level, gRPC streamlines messaging between clients and back-end services. When compared to the REST+JSON combination, gRPC offers better performance. And it heavily recommends the use of SSL/TLS to authenticate the server and encrypt all the data exchanged between the client and the server.

Like many RPC systems, gRPC is based on the idea of defining a service and specifying the methods that can be called remotely with their parameters and return types. Similarly, like Rest uses JSON/XML as the Interface Definition Language (IDL), gRPC uses Protocol Buffers by default for describing both the service interface and the structure of the payload messages.

In gRPC, a client application can directly call methods on a server application on a different machine as if it was a local object, making it easier to create distributed applications and services. 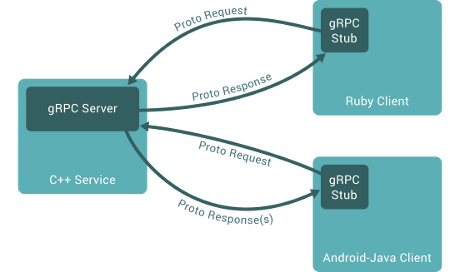 gRPC clients and servers can run and talk to each other in a variety of environments and can be written in any of gRPC’s supported languages, such as server written in Java with clients in Go, Python, or Ruby.

gRPC has excellent cross-platform support! gRPC implementations are available for every programming language in common usage today. However, one place you can’t call a gRPC service from, is a browser. gRPC heavily uses HTTP/2 features and no browser provides the level of control required over web requests to support a gRPC client. So, you need to use a proxy, which has its limitations. There are currently two implementations of the gRPC-Web client. Not all of gRPC’s features are supported by gRPC-Web. Client and bidirectional streaming aren’t supported, and there is limited support for server streaming.

HTTP API requests using JSON are sent as text and can be read and created by humans.

gRPC messages are encoded with Protobuf by default. While Protobuf is efficient to send and receive, its binary format isn’t human readable. Protobuf requires the message’s interface description specified in the .proto file to properly deserialize. Additional tooling is required to analyze Protobuf payloads on the wire and to compose requests by hand.

gRPC is well suited to the following use cases:

gRPC is a powerful new tool, which has a growing community and support from Google and CNCF. While gRPC is not a complete replacement for HTTP APIs, it offers improved productivity and performance benefits in some scenarios such as microservice communication, real time communication etc.