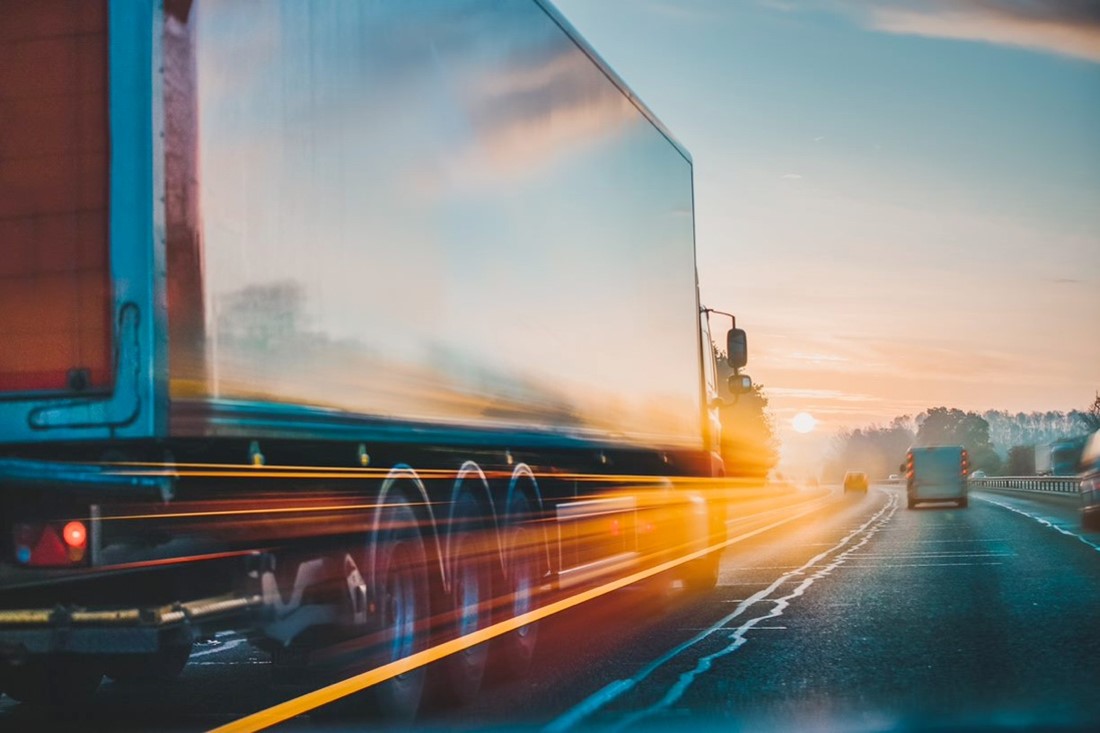 How often do you want to deploy to production? Weekly, daily, maybe as soon as possible? In this article, we are going to discuss an approach to deliver fast to production by using feature environments and a release process.

A feature environment is a feature branch deployed in an ephemeral environment, which enables automated tests and QA to test that feature in isolation, before deploying to production [1]. It's a separate staging environment for each feature branch, allowing fast delivery of the features.

Figure 1 demonstrates the concept and process of feature environments. 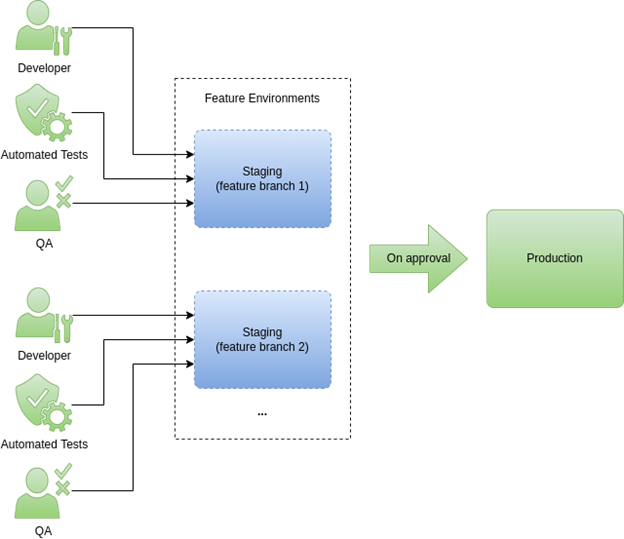 Let's propose an example to demonstrate in more detail how to use feature environments. Suppose we are developing a system called Example. This system has a mobile app and an API (hosted on api.example.com), which in turn uses a database (example_db) and a cache. The production environment is represented in Figure 2.

Figure 2 – Architecture of the Example system in production

We are going to discuss how to apply feature environments for the Example API. The mobile app follows a similar process, but with feature branch builds, i.e., each feature branch generates a different build.

Also, it’s important to keep in mind that the mobile app should be able to be configured to connect to any API address. This can be achieved by enabling a testing mode that would allow us to select or type the environment to connect. The same rule should apply to other clients (e.g., web app), if any.

Given that, let’s discuss some points before checking the architecture of feature environments for this Example system: 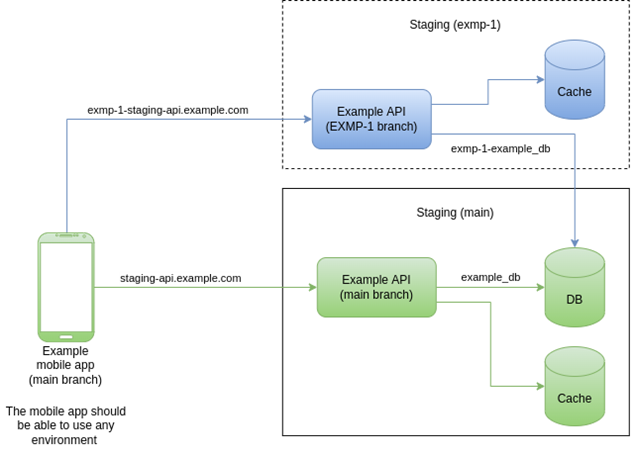 Figure 3 – Architecture of feature environments for the Example API

Once we understood the basis of feature environments and checked the Example API, we can propose a release process that demonstrates how to deliver fast to production. This process contains the main aspects that leverage feature environments and fast delivery, but it’s important to mention that it can be simplified, optimized, or even changed in some parts, depending on your project needs.

To explain this process, we are going to use the Example API and a task called EXMP-1 that needs to be implemented and deployed to production. Let’s start with the process from that task being “ready to be implemented” to it becoming “ready for production”. Figure 4 describes all required steps to accomplish this.

Steps 3 and 5 are crucial points in this process: automated tests. They are especially important to ensure the new feature/change is working as designed and other features are still working (regression tests). In step 3, unit tests should cover methods in isolation, whereas integration tests should cover so many different ramifications of the code. We also need to enforce a high percentage of code coverage to ensure the developers created enough tests. In step 5, automated End-to-End tests run against the feature environment to ensure the entire flow is working.

Code review is done in step 6 and then the task is ready for QA. It could also be done in parallel with step 3, but we prefer it after the tests, so the code under review is stable and potentially ready to go to production.

QA comes into play to do par final checks (step 8), which can include smoke tests with the clients of the API, some exploratory tests, etc.

Any change in the feature branch (due to code review, bug, test failing, product request, back merge etc.) makes the task return to step 3. This is important to ensure the changes implemented are stable.

When EXMP-1 is approved to go to production, it follows the process described in Figure 5, until it is done. 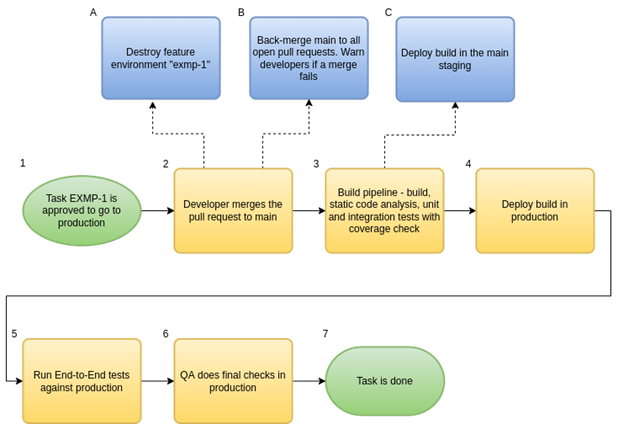 Even with step B, we don’t recommend promoting the code from the feature branch build directly to production, because the main branch must be the sole source of truth. Also, a pull request should only be merged if it’s up to date with the main branch, otherwise, there is the risk of losing changes.

Lastly, if automated tests or QA finds a critical bug in production, it’s important to have other practices already implemented to either revert the deployment or disable the new feature:

Before adopting the release process, we have seen in the last section, we should discuss some pros and cons.

In this article we presented an approach to apply feature environments to deploy faster to production with short release cycles. You can now evaluate if this approach can be applied to your project and also make some adjustments to it, if necessary.

[1] LÜDEMANN, C. Feature Environments In All Environments – A Guide To Faster Delivery. 2018. https://christianlydemann.com/feature-branches-in-all-environments-a-guide-to-test-once-and-deploy/

[3] SURENDRAN, A. What are On-Demand Feature Environments? 2020. https://medium.com/techbeatly/what-are-on-demand-feature-environments-982eaa96fdd5

The importance and value of Feature Flag Management

GitOps Patterns (inside and outside Kubernetes)