GitOps Patterns (inside and outside Kubernetes)

In this blog, we are going to talk about GitOps, its patterns, pros, cons and challenges, including a brief example of how it integrates not only with Kubernetes but other declarative infrastructure tools.

GitOps applies the versioning and deployment process usually made for applications to infrastructural components, taking advantage of infrastructure as a code and the emerging tools, which allows us to have idempotent declarations of our infrastructure.
There are two ways to implement GitOps (Pull and push based), but they share one thing in common; setting a “source of truth”, that defines the characteristics of the infrastructure.

This approach allows us to have more control over the deployment process, as the pipeline manages the whole deployment, we can make use of all tools provided by the CI-CD agent of our choice, such as:

Whilethe simplicity is very attractive it comes with a few downsides:

Once again, this is not wrong, and most pipelines would follow the above pattern. 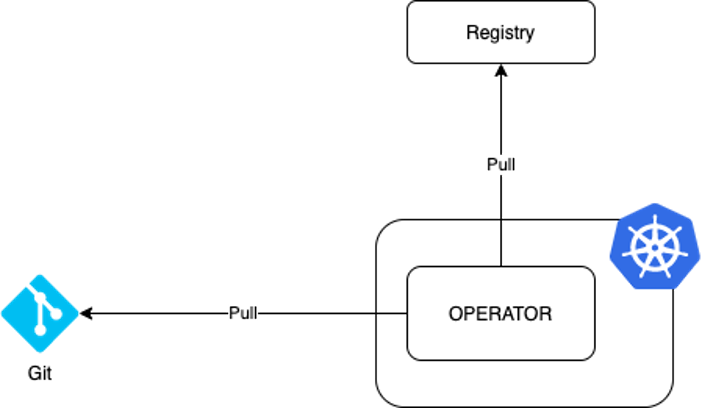 With this approach the operator takes over responsibility, and pull requests become more sensible as changes get reflected in the infrastructure as soon as it merges with the target branch. This methodology has some benefits:

However, this great automation process comes along with a few challenges:

Let's take a quick example, in which I'll be using a local Minikube cluster, a GitHub repo and FluxV2.

First, we initialize the repository with the Flux components, for which you will need a PAT (Personal Access Token) from your git provider, in this case GitHub:

We will see the following components created in our repo automatically, which represent the Flux system files

Now we can add more folders alongside the Flux-system folder which would represent different namespaces and a sample application deployment (nothing too complex for this example).

With the following directory structure

And if we wait for a moment the declared resources will appear in the respective namespace.

Now comes the tricky section because you might ask the following questions:

For most of these questions the answer would depend on several factors.

These factors help define how many clusters are required if there’sneed to separate environment per cluster or per namespace, The number of repositories that are needed, ability tohandle concurrent changes to the clusters, and change propagation through different environments.

Keep in mind that there isn't a “right way to do GitOps”, and that there are many paths which will accomplish the same goal, each with their corresponding pros and cons.

A common branch strategy in which we have a dev and a main branch would usually need an environment for each branch. This means that we must have the ability to change configuration depending on the environment. In this case, all you need is to specify the branch to monitor

This can also be achieved in the same branch by adding both environment files in the repository. We will though have to make some changes to our directory structure:

The Kustomization object has different values or patches depending on the environment. This implementation is known as “the monolith”, which is perfect for small projects but as more projects are added, it gets harder to navigate through the repository.

Another factor to keep in mind is “teams”. With time, as more projects and teams emerge, it gets overwhelming for a single person to handle this. Organizations add more people to infrastructure management, ideally one per team to separate the infrastructural components from the core components and different teams' components, which in turn means more repositories. 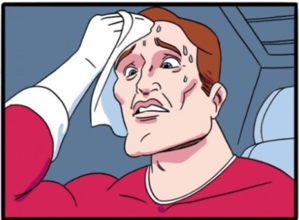 Kustomize and Helm may be used to add controllers to handle the complexity as more repositories are created.:

NOTE: this source was made using a public Git repo, if you have a private an organizational Git repo, then more flags and a ssh secret are needed to prevent authentication error.

Then, add that ssh key decoded data into the Git repository as a deploy key and finally add this flag to the source:

These files declare a new source which is in a different repository and how that source needs to be interpreted. Let's look at the new repository strategy:

Now, there are more sources of truth managed by different people, but what about responsibility? What if the branching strategy is different? Some organizations only make PR (pull request) directly to main and handle release branches, so there’s need to listen to multiple branches.

Once again, there is no one right way to do GitOps, and it depends on the organizational needs.

One of the problem areas is secrets management. Versioning connection string, keys and certificates doesn’t sound right, but there are two options.

So, is GitOps tied to Kubernetes?

Not exactly, though most pull-based tools for GitOps were designed with Kubernetes in mind. GitOps covers both pull and push based methods, but if we reconstruct the workflow without the Kubernetes related components, we can still make use of GitOps in either push or pull strategy with an IaaC tool that follows idempotency, like AWS CloudFormation, Azure Bicep or Terraform. In the pull case, there isn't a Flux-like tool and one needs to be created. This is not too hard. Let's analyze the following diagram:

Here, we would have an application “Source Controller” which would be constantly pinging the repositories for changes and apply the files if the latest commit changes. This can be a virtual machine, a serverless function or even a container running in your cluster as long as the files follow idempotency to ensure that changes would be additive rather than destructive.

In Python, an example would be like the following:

Join Us at Encora

Are you a developer or engineer looking to make an impact on the world through technology? Visit Encora careers to join a passionate community of innovators and receive unmatched opportunities for professional development and benefits.