Almost every application these days communicates over HTTP: websites, RESTful services, and even SOAP APIs all make use of Hypertext Transfer Protocol. For the most part, we don’t worry too much about what is happening at the network level when we’re building these applications.

However, from time to time a problem will show up that needs us to drop to the level of the network to figure out what is going on. This is the story of one such situation and how using Fiddler or Charles could make your life much easier.

How to identify HTTP-based issues?

In order to identify HTTP-based issues, the best solution is to capture the data traffic of your app and look at individual requests or even raw packets being sent back and forth. In web-based apps, we would probably look at the data traffic using some kind of inspector, like Chrome DevTools. But what about mobile apps? The best and simplest solution is to use an HTTP debugging proxy server tool.

In general, HTTP debugging proxy server tools can be used for a number of reasons, but they are great for capturing HTTP traffic and logging it for the user to review. Also, most modern tools are capable of decrypting HTTPS (HyperText Transfer Protocol Secure) traffic.

To understand how the decrypting is done, let’s take a closer look at how HTTPS works. In general, HTTPS appears in the URL when a website is secured by an SSL (Secure Sockets Layer) certificate (also known as Transport Layer Security or TLS).

The way these tools make HTTPS decryption happen is by using self-signed SSL certificates to fake a certificate for the HTTPS endpoint, thus implementing a man-in-the-middle interception. This means that the computer running the proxy tool will be able to see all the data communication that is happening on the mobile device.

Fortunately, there are many great tools available for this purpose, but we will take a look at the two top ones – Fiddler and Charles.

Fiddler is a free web-debugging proxy for any browser, system, or platform that monitors, inspects, edits, and logs all HTTP(S) traffic and issue requests between your computer and the Internet. The tool enables you to inspect incoming and outgoing data, monitor and modify requests and responses before the browser receives them.

Putting a debugging proxy between a client and an HTTPS endpoint won’t work because HTTPS cannot be decrypted by the proxy. Fortunately, Fiddler offers a workaround where it will insert a new certificate in the SSL keychain and use that to fake a certificate for the endpoint.

With the SSL certificate in place, network traffic can now be intercepted.

Fiddler Everywhere delivers a range of handy and user-friendly features whose number and further development are not limited.

Fiddler Everywhere inspects and logs all HTTP(S) and WebSocket traffic between your computer and the Internet and enables to capture traffic from virtually any application that supports a system proxy.

Fiddler Everywhere provides an HTTP(S) and WebSocket traffic-analyzing functionality, which renders the captured information in a structured way and visualizes various statistical data for one or more captured sessions. It can also decrypt secure traffic and save, receive, and share captured traffic with collaborators.

Fiddler Everywhere comes with an API Composer, which allows you to test REST and SOAP APIs by creating and sending requests as well as save and share composed APIs. You can use the API composing feature both when developing new APIs and when testing existing APIs.

Fiddler Everywhere provides a secure method for saving and sharing network debugging logs with your teams for analysis, communication, and resolution.

Fiddler Everywhere provides platform-agnostic compatibility that enables you to install, configure, and run the web-debugging tool on Windows, macOS, and Linux system-operating machines.

Fiddler Everywhere enables you to also capture and inspect traffic on devices running on iOS and Android.

Fiddler Everywhere delivers a modern, intuitive UI and a set of popular themes.

Charles is an HTTP proxy / HTTP monitor / Reverse Proxy that enables view all of the HTTP and SSL / HTTPS traffic between the machine and the Internet. This includes requests, responses, and the HTTP headers (which contain the cookies and caching information).

Web browser is configured to access the Internet through Charles, and Charles is then able to record and display all of the data that is sent and received.

Since the user is unable to see what is sent and received between browser/client and the server, it is difficult and time-consuming to determine where the fault is without the visibility. Charles makes it easy to determine what is happening, quickly diagnose and fix problems.

Setting up Charles to handle HTTPS traffic is quite easy. The setting can be found under the Tools menu and is called SSL Proxying Settings. 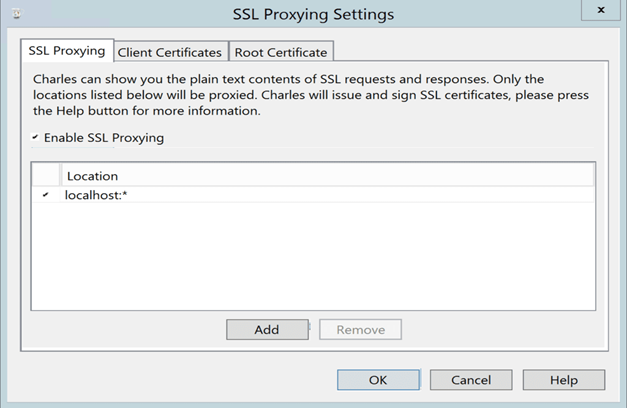 The options dialog for SSL interception in Charles.

Charles can act as a man-in-the-middle for HTTP/SSL communication, enabling you to debug the content of your HTTPS sessions.

Charles simulates modem speeds by effectively throttling your bandwidth and introducing latency, so that you can experience an entire website as a modem user might (bandwidth simulator).

Charles is useful for XML development in web browsers, such as AJAX (Asynchronous JavaScript and XML) and XMLHTTP, as it enables you to see the actual XML that is flowing between the client and the server. Charles natively supports JSON, JSON-RPC and SOAP, displaying each in a simplified tree format for easy viewing and debugging.

Charles is great for Adobe Flash developers as you can view the contents of Load Variables, Load Movie and XML loads. Charles also has native support for Flash Remoting (AMF0 and AMF3).

Other features of Charles.

In general, those man-in-the-middle apps can be used for:

There are a number of good options that can fill the role of a debugging proxy. There are many other tools like Wireshark, Debookee, or Proxyman which perform almost the same task.

Each of them has its own advantages/disadvantages which fit the needs according to the task to be performed.