Blockchain is a revolutionary, potentially groundbreaking, and disruptive technology of the 21st century. It is a distributed open ledger, which keeps an end-to-end digital record of any given transaction. As per the term, it is a block of one or more transactions, and these blocks form a chain. Blockchain is:

Blockchain is a framework for managing distributed ledger, while Bitcoin is a Cryptocurrency, which is built on Blockchain technology. Other common cryptocurrencies inlcude Ethereum, Ripple, and Litecoin among others.

Satoshi Nakamoto (pseudo-name) invented Blockchain and Bitcoin in 2008-2009 when the world’s financial institutions and banks were undergoing turmoil and were falling apart. Bitcoin is a digital currency, which is not owned by any central bank. It can be transferred from a user to another without the need for intermediaries. 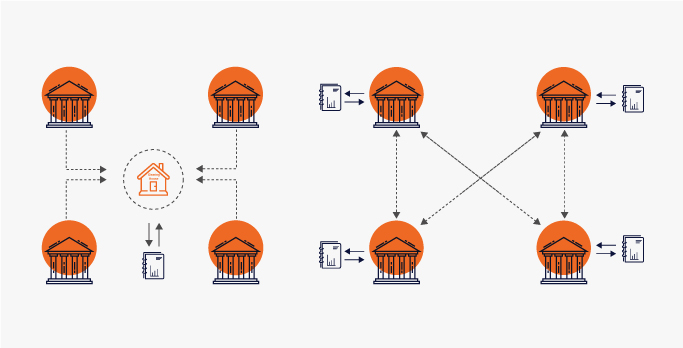 Lets’ assume a network of 10 parties, and we need to perform a transaction between two parties. When this transaction is posted on the network, other parties compete to create a solid mathematical proof of that transaction. Transactions are verified by network nodes through Cryptography and recorded in a distributed ledger. Blockchain uses public-private keys for signing the content transferred over the network and hashing to check whether the contents are transferred without compromise. To achieve independent verification of the chain of ownership, each network node stores its own copy of the Blockchain ledger. The Blockchain architecture allows a distributed network of computers to reach a consensus without the need for central authority or intermediaries.

In a P2P (peer-to-peer) Bitcoin network, participants working on creating Blockchain distributed ledger are often called miners. They are rewarded with Bitcoins for their contribution to computing power for validating the transaction and forming a block. This comes in the form of both newly issued Bitcoins and from the transaction fees included in the transactions. The share of the reward depends on the computing power miners contribute. In most countries, Bitcoin mining is legal. In early days miners were able to use the computer CPU or high-speed video processor card. Today, custom Bitcoin ASIC chips offer performance up to 100x the capability and are available on the Amazon marketplace.

The Future of Blockchain Technology

“Blockchain will do for transactions what the internet did for information,” is a famous quote by the CEO of IBM, Ginni Rometty. We all know the impact of the internet on the information, which was earlier in silos and difficult to get access. Therefore, it might not be wrong to say that what we are seeing in terms of Blockchain technology currently is just the beginning.

Blockchain-based cryptocurrency is gaining traction around the world. Many organizations and individuals have started transacting using this digital currency. A Cryptocurrency Exchange is a digital marketplace where traders buy and sell cryptocurrency using US Dollar (or any other government-issued currency). Some of these exchanges have also set up a derivatives trading platform for trading futures and options in digital currency.

Blockchain technology helps in gaining transparency, speed in connecting diverse endpoints, and ease of reconciliations, and many organizations around the world are betting big on it. They are working on Blockchain-based applications to showcase POV (Proof of Value).

Some of the potential use cases which can utilize Blockchain in future:

Many believe that Blockchain may be in the throes of the technology’s hype cycle, but it also has the potential to transform every aspect of society. Blockchain will remove intermediaries from information exchanges and will help in sharing valuable data in a secure, tamper-proof way.

UI vs UX: How are They Different?

When to automate a test case?