Are Low-Code/No-Code Platforms (LCNCP) a Threat or an Opportunity for the Software Development Sector?

LCNCP seek to simplify the creation of software by requiring little or no programming knowledge. They allow the creation and deployment of computer applications, visually by dragging and dropping pre-made components. The promise of these LCNCPs is to provide business users (“citizen developers”) with a platform that they can quickly build applications without involving software development specialists or doing so minimally.

Consultants such as Gartner and KPMG forecast that in less than three years, there will be a notable increase in the adoption of these technologies from medium to large companies, driven by the need to respond quickly to market demands, as well as by the growing shortage of specialized personnel in the IT sector.

Given this panorama, it is pertinent to ask ourselves if this represents a real threat to the software development sector or, on the contrary, can be treated as an opportunity. 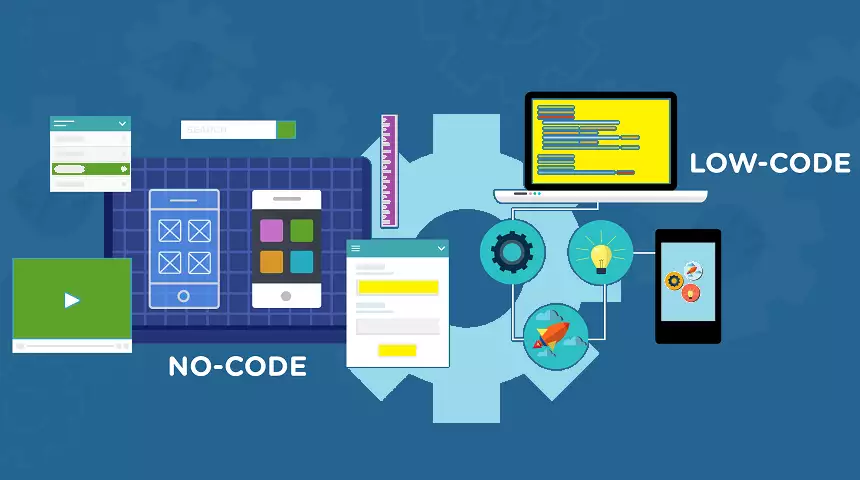 What Are Low-Code/No-Code Platforms (LCNCP)?

They are application development platforms that enable rapid application delivery with minimal coding, and quick setup and deployment. The term generally refers to any class of software and tools that provide:

Although the terms No-Code and Low-Code are usually always used together, there is a slight difference that should be specified. The difference is indicated in their very names, and it is related to the level of programming that we need to apply to achieve the desired software product.

In this sense, the NCPs provide solutions for specific segments, sectors, and industries, where there is already an established knowledge base and the customization need is lower. On the contrary, LCPs can be considered somewhat more general purpose, depending on the degree of programming that is allowed.

LCNCP and the Historical Evolution of Software

The evolution of software has always had to do with raising the level of abstraction and in this way, we have been able to address increasingly larger and more complex problems in all fields of human activity. It would be unimaginable to try to solve the challenges we currently face without software support. Managing a higher level of abstraction is what has allowed us to better model things in the context of our interests.

Software has evolved from machine-level code, through assembly languages, general-purpose languages (structured and/or object-oriented), CASE tools, 4GL, and domain-specific languages. This evolution has been taking, up to now, the form of programming languages with their own paradigms and variants; but now we can consider the LCNCP as the next link in this software evolutionary chain. Although they are not “formal programming languages”, they are the new tools that allow us to create software applications in less time and with fewer resources. Due to their higher level of abstraction, we only need to worry about specifying the characteristics of our application and not about how to technically implement them.

These LCNCPs have been in existence for at least two decades and have been constantly evolving and can be considered to emerge as an evolution of the Model Driven Engineering movement.

Every business has a unique set of difficulties that necessitate customized solutions. Traditional development can develop unique applications, but at a significant expense in terms of budget, development and go-to-market time, and timely maintenance. As a result, it is not a desirable scenario for most businesses/organizations. LCNCP on the other hand, provide organizations with the appropriate tools for application development. They boost an organization’s overall efficiency, morale, and production.

Certain criteria can be used to differentiate between low-code and traditional development as depicted in the following table:

The LCNCP market is constantly rising. It also happens because of the growing users’ interest in this technology.

According to Gartner, almost 65% of major corporations would employ at least four LCNCP for digital application development by 2024 year-end, enlarging this market more and more. [1]

KPMG reports that 100% of enterprises that have put a LCNCP into place have reported a positive ROI2. They also say that the number of business executives who list this type of development as their most important automation investment has nearly tripled since the pandemic began.

Similarly, Markets and Markets says that the global LCNCP market size is projected to grow from USD 13.2 billion in 2020 to USD 45.5 billion by 2025, at a CAGR of 28.1% during the forecast period. The increasing need of digitalization and maturity of agile DevOps practices are expected to enhance the use of low-code development platform market across the globe [4].

Gartner has identified 12 of the most prominent Enterprise LCNCP vendors in the industry. The authors of the research evaluated each provider’s strengths and weaknesses and graded them on the “Magic Quadrant” chart, which tells readers how effectively each provider can carry out their goal. Leaders demonstrate both strong execution (particularly in terms of business performance) and a strong vision (in terms of product and go-to-market strategies). These vendors stand out in a highly competitive, global market and serve a wide range of organizations and application use cases with their robust Enterprise LCNCP offerings. Leaders are Mendix, OutSystems, Microsoft, Salesforce, and ServiceNow [5]. 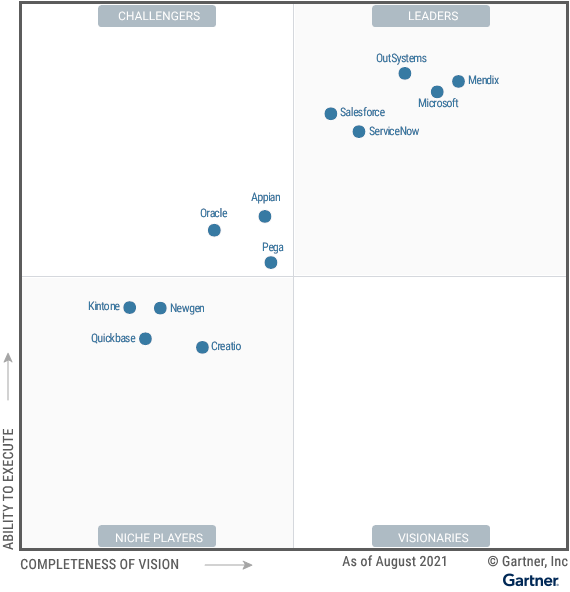 The LCNCP is not a passing technology, and has been evolving for almost 20 years.The functionalities have matured a lot, making real the possibility of building software even without knowing or knowing little about programming languages, thus allowing business users to build software applications that the company needs to meet the demands of its markets.

Although much of the technological knowledge to run the applications created by "citizen developers" is cleverly codified in the LCNCP; there are still areas, such as managing information security, the complexity of certain business functions, or the governance of multiple LCNCP applications which require the participation of "professional developers", to work together with "citizen developers" in a more integrated way and closer to the business domain.

In this scenario, we can see that the LCNCP does not represent a threat to the software development industry or to specialists in that sector. On the contrary, they would be a great opportunity to increase their capabilities by incorporating the LCNCP in their arsenal of tools to take advantage and make software applications available to companies in a short time, but of better quality, with greater security and better governance.