Apache Airflow was developed by Airbnb’s Beauchemin in 2014 as an open-source enterprise job scheduling engine in Python programming language and was designed on the principle of "configuration as code". This project was moved on to the Apache Software Foundation as a part of the Incubator Program in March 2016. In January 2019, Apache Airflow joined the top-level project list. Now Airflow is a leading workflow orchestration and job scheduling engine in the open-source world.

Apache Airflow 2.0 was released on December 17th, 2020 with major features including a refactored and highly available scheduler along with over 30 UI/UX improvements. Other important features of Airflow 2.0 are horizontal scalability, zero recovery time, easier maintenance, and Full REST API.

In this blog we are going to use Docker and Docker Compose for running Apache Airflow 2.2.3 on our system. We will also develop a simple job (DAG) that executes tasks in parallel.

Airflow is growing fast among organizations for orchestrating workflows or complex data pipelines using Python programming language. This software is one of the most robust platforms used by the data engineering team for scheduling complex jobs. UI/UX interface of Airflow can easily be used to visualize complex data pipelines, it’s dependencies and the job progress, logs, and status.

Getting started with Airflow 2.2.3 with Docker

The prerequisite for running Airflow 2.2.3 as Docker container is the latest version of Docker service and Docker Compose utility. Install Docker service and Docker Compose on your host operating system. We are using Ubuntu 18.04 for running our test Airflow 2.2.3 instance. Steps explained here apply to Ubuntu 18.04 or above. This instance will use the CeleryExecutor in Docker for running the scheduled jobs.

To deploy Airflow on Docker we will use the docker-compose.yaml file distributed as part of official Airflow 2.2.3 distribution. Create a new directory AirflowSetup on your disk as shown below:

The curl command will download docker-compose.yaml file into the Airflowsetup directory.

Airflow webserver: The webserver is a web application listening at 8080 port and provides UI for managing the jobs.

Airflow Worker: The worker node is responsible for executing the task assigned by the scheduler.

Airflow init: The init is used to initialize the service.

Flower: This service is used to monitor the running jobs and it can be accessed at 5555 port.

Postgres:  Postgres is used as a database.

Redis: Redis is used as a broker for forwarding messages from scheduler node to worker. 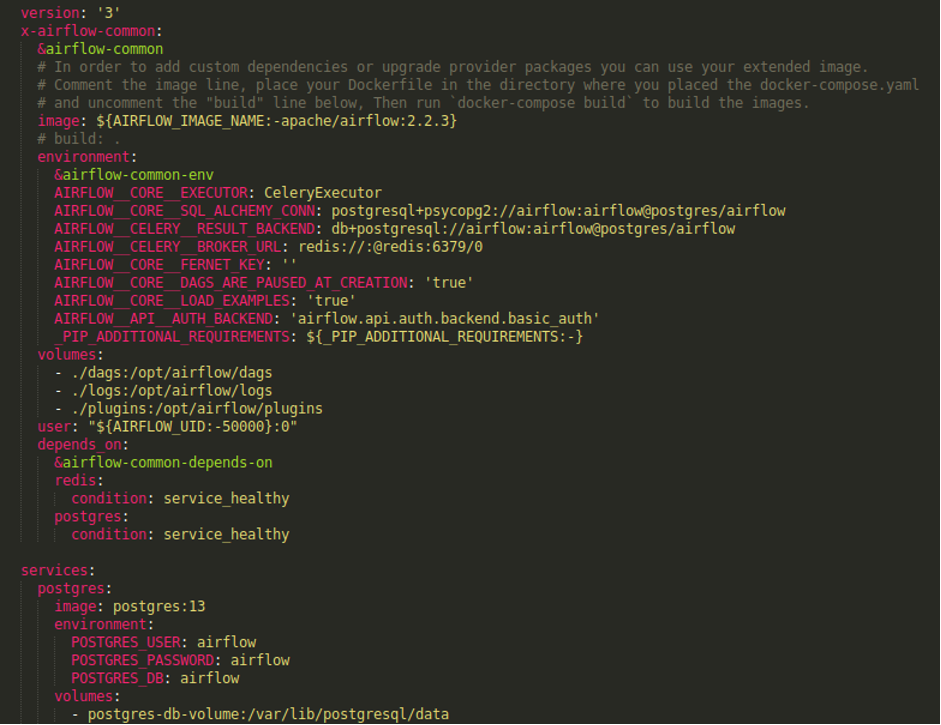 ./dags - You can put your DAGs in this directory.

./plugins - Extra plugins can be placed in this directory.

Following commands can be used:

You should not set up 777 as permission in your production environment. For appropriate permissions, consult your administrator.

Before running Airflow, you must initialize the database and for this following command should be executed:

Output of the command:

After successful execution, the following output should be displayed:

To run the Airflow 2.2.3 on your machine, execute the following command in the same terminal:

This command will start Airflow server with following output:

Accessing Web Server from the browser

Airflow web server listens at the 8080 port and can be reached by opening http://localhost:8080 in the browser. 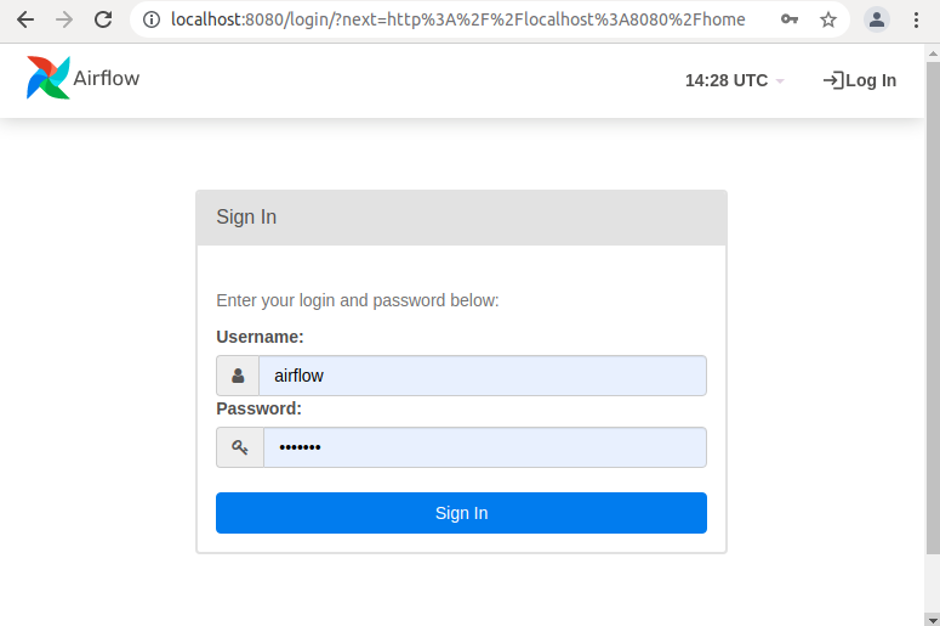 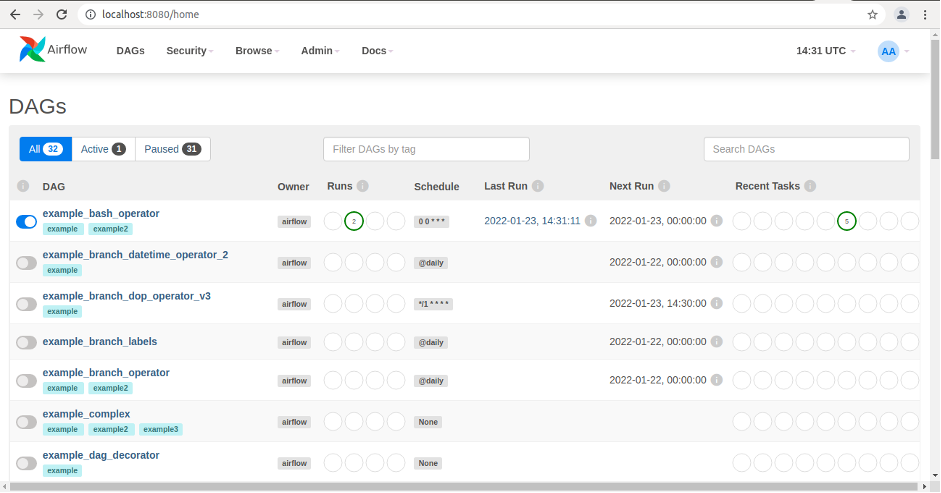 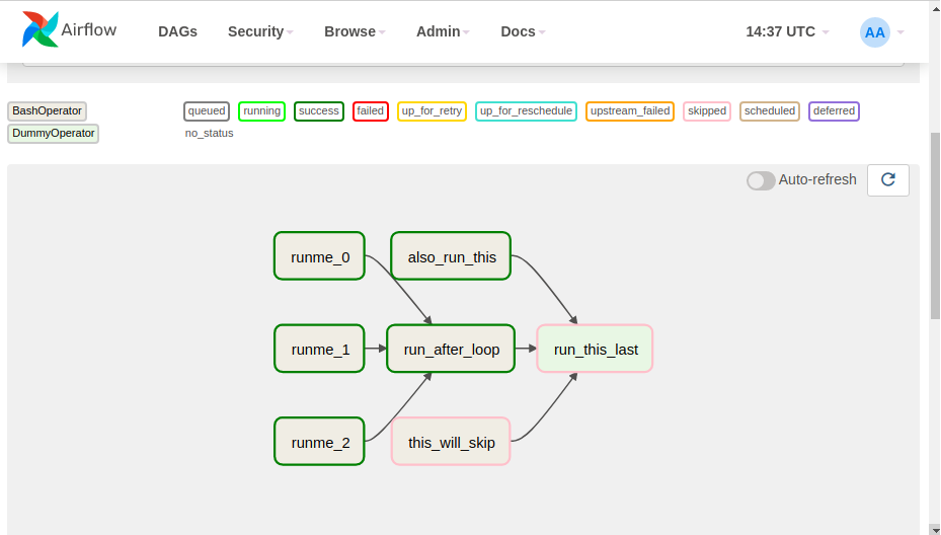 The Airflow Flower is a web-based tool reachable at port number 5555 and used for monitoring/ administrating the Celery clusters. Open the browser and navigate to http://localhost:5555 to access the Airflow Flower UI. Here is the screenshot of Flower interface: 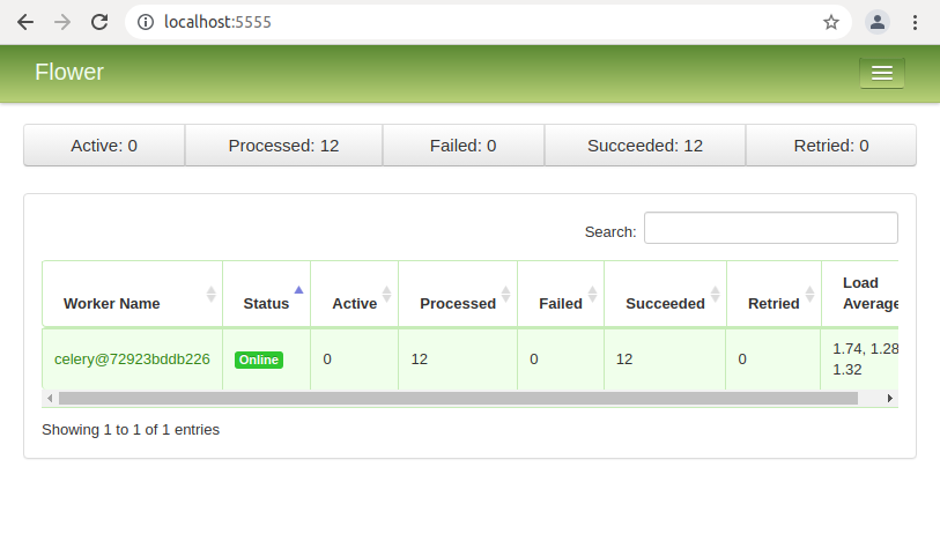 Developing and testing your DAG

Airflow DAG’s are developed in Python programming language and are saved in the “dags” directory of Airflow.

In the dags directory of Airflow, create a new file “current_time_dag.py” and add the above code. This DAG is a very simple Airflow DAG for displaying the current time on the console at an interval of 5 minutes.

After enabling the DAG in the Airflow Administrator console, DAG will start executing at an interval of 5 minutes.

Airflow is a powerful open-source enterprise grade job scheduling engine which is being used by businesses to build complex data pipelines having multiple jobs dependent on each other. The GUI features of Airflow allows users to monitor and maintain their jobs easily. It also gives users t detailed logs for each job execution which helps when analyzing any failures.