Before we go deeper into this feature of Snowflake, let’s step back and talk about what Snowflake is.

Snowflake is a cloud-based data warehouse that offers a single platform for all data needs. This includes data warehousing, data lakes, data engineering, data science, and application development. Additionally, Snowflake offers a “pay as you go” pricing model, which allows users to only pay for the storage and computing resources they use. Its architecture is defined on a Shared-disk and Shared-nothing database architecture and has three architectural layers: 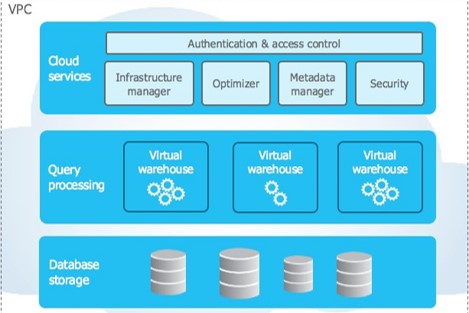 What Is Zero Copy Cloning?

Cloning is not a new concept, with one of the best examples being - git clone.

It is a common concept for databases too, like Oracle, DB2, and SQL Server. We can clone data by copying, which has multiple disadvantages:

How Does Snowflake Clone Data So Fast?

In the traditional approach, cloning creates a real copy of the database which consumes space.

Snowflake instead, has a wonderful utility called Cloning (they call it Zero Copy Clone) which can clone a database/table seamlessly with a simple command. It is very similar to Pointers that are just a reference to another variable; instead of actually being the variable. When a command is given to clone a database, it does the following:

One could expect the data to be held as a “replica.” But it’s not. What Snowflake smartly does is create a pointer/reference to the source database/tables from the cloned object. When a user queries a table from the cloned object, the cloud service simply fetches the data from the actual source, making the data as up-to-date as possible.

Snowflake does all this by playing around with the metadata. When you create a clone for your data, Snowflake, instead of copying data, creates new metadata information pointing to the data of interest. All these operations are performed by Snowflake’s global services layer. This means you can literally clone terabytes of data within seconds without incurring in computation or storage costs.

How Does Snowflake Handle Update Operations?

Once written, Snowflake micro-partitions are immutable and cannot be modified.  This means, when a user executes an UPDATE operation, instead of finding and updating the data in place, Snowflake simply creates a new version of the relevant micro-partitions with the changed data.

Example:
As a first step, let us create a clone of production data (Table_A) to the stage environment with just a simple command as shown below:

With the above command, TABLE_A_CLONE is created in the stage environment with the same data available at the time of running this query in the table named TABLE_A.  TABLE_A_CLONE is the same as any other table & supports all kinds of DML and DDL operations. Snowflake’s underlying architecture stores data in smaller blocks called micro-partitions. So essentially, your clone is just a new set of metadata that is pointing to the same micro-partitions that holds the data of Table_A (as depicted below). 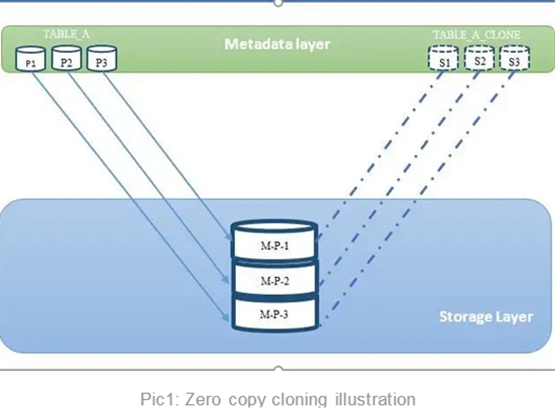 Micro-Partitions in Snowflake are immutable, meaning that once created, they last in the same state until the table is dropped. Hence, the change in stage environment is captured separately and metadata points to the newly created micro-partition and updates TABLE_A_CLONE. So, additional storage costs are levied only for the modified data but not for the complete clone. This change is depicted as below. 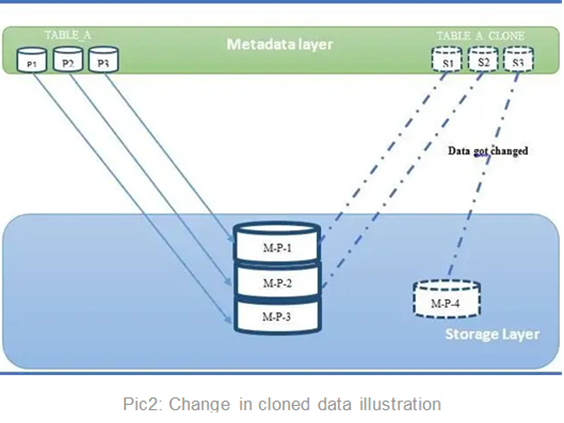 A cloned object does not automatically get copy privileges from the source object during cloning. A system administrator, or the owner of the cloned object, must explicitly grant any required privileges to the newly-created clone.

To summarize, here are the key advantages of zero copy cloning:

Zero-Copy Cloning can avoid creating multiple development environments in separate accounts. Until now, the typical development team used to create separate production, development and test environments, which was costly and time consuming. Creating on large copies of production tables was a tremendous task. The alternative offered by companies like Snowflake Zero Copy Cloning can not only save you time, but it will also save you a lot of money!