Cyndy Cortés, QA Manager: Success Is “the Satisfaction of Giving it Your All.”

When the Quality Assurance (QA) engineer Cyndi Cortés arrived at Encora’s Central & South American Division, the QA Unit Manager, Juan Carlos Porras, said something to her that, to this day, remains engraved in her memory and helps determine her actions in both her personal and professional life: “quality is non-negotiable.” 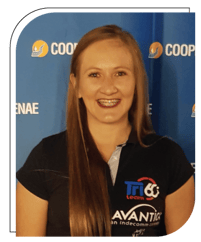 For Cyndi, success is the sum of small daily efforts and finding happiness in the process. With this philosophy in mind, she gained skills in the QA field eventually becoming the manager for one of our division’s most important banking projects. At the same time, she won a triathlon in her category.

We talked to her to learn more about her life philosophy, aspirations, and how she balances her work as an engineer with her career as an athlete.

You managed to be successful in two areas simultaneously. What is the key? How do you find a balance between your work and such a demanding sport as competitive triathlons?

Much of it is discipline, but it goes hand in hand with passion and with what makes you happy. 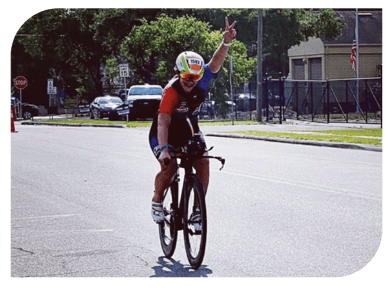 It’s not easy when the alarm goes off at 4 am so I can go train. When the alarm rings, I have to get up because, in the end, it’s what brings me satisfaction and happiness.

I don’t live to work, but it’s all about complementing it with my sport. I know I can’t wear myself down with my training because I have to work the rest of the day. I also take the effort I put in at work into consideration when training.

You started doing triathlons four years ago when you were already working at our company. How did this passion begin?

I started running at 18 when I was in university, but it was due more to aesthetic concerns and losing weight.

Running became a discipline for me but, I had an injury six years ago and stopped running. Then, a short time after joining Encora CSA, I decided to run a marathon (the Roadrunner), and the injury got worse.

One of my menisci required surgery, and my orthopedist said running would only lead to further injuries. So I started swimming and riding a bicycle, but at a basic level.

When I went to swimming lessons, I saw a triathlon team training at the same facility, which piqued my interest. So I talked to the trainer and asked him to train me only in swimming and cycling since I wasn’t interested in running.

In the end, with therapy, I was able to overcome my fear of running. Of course, having my menisci removed was something I had to be careful with, but it was not a limiting factor.

I started with the team four years ago. Six months later, my trainer asked me to sign up for the Sprint category (the shortest distance) in an event in Costa Rica called Serie Triatlón. No one was expecting it, but I achieved first place that day.

Then I moved up to the Olympic category, and after that, I began to like the endurance categories more and more, which are long distance. So I have dedicated myself to these over the last two years.

At a personal level, what is your most significant achievement?

It was overcoming the fear of taking up sports once more and being able to run again. When they told me I would not run again due to my injury, it was like having a bucket of iced water poured over me. So even though at that moment I took it as part of life, I think my biggest success was overcoming the fear and understanding that you don’t have limits.

I don’t consider winning a race a success because l still give it my all even if I don’t win. A race result says a lot, but being successful is not determined by winning. What matters is the satisfaction of giving it your all.

And your most significant achievement at a professional level?

At work, it’s a daily thing: being able to satisfy a client’s needs and going a step further than expected.

Did you always see yourself as a QA engineer?

When I finished university, my first job was in QA, and the truth is, I liked it. So I stayed and have continued to work here.

Could you give us a list of the opportunities you’ve had within the company?

I will always be grateful for Juan Carlos Porras because I had very little QA knowledge when I first came here, but he saw my potential. He gave me the opportunity to be part of a company that has allowed me to grow professionally. He has always supported me; he gave me the tools and threw me in the water, so to speak.

The company’s career path has also helped because it allows us to receive constant training, and we have everything at hand to keep growing as professionals.

When Sofía Llona took on the manager position for the Banco de Costa Rica (BCR) project, she gave me even more opportunities, and I took on a leadership role for that project.

I also have a lot to thank Luis Carlos Chaves for because he has always believed in me as a professional and athlete.

What is the most important thing you instill in your staff?

To give their best. I provide my team with the opportunity to be independent and do their job their way. But I always motivate them to go that extra mile, which can be hard to do sometimes.

I always remind them that not everyone has the opportunities this company gives us. Therefore, how we treat clients is a way of giving back and returning the trust that has been placed in our work.

I like to communicate with my team constantly and for them not to see me as the lead. We stand side by side, and we’re all the same.

What motivates you to remain in this company?

Besides the opportunities for professional growth, it’s essential for me to have time for myself. Right now, we are working from home, and not being stuck in traffic daily gives me real quality time. So WFH is vital for me.

I can also say that my managers have always treated me like family, and they worry about me. At this company, I’m not just a worker; they value people’s human side.

As an athlete, what feeling do you get while representing our brand? What opportunities has it brought you?

Lots of satisfaction. It was a surprise when Encora offered to be my sports sponsor. I was not expecting it because very few people knew I did triathlons. Luis Carlos told me: “I’m going to support you.”

They have believed in me, and I feel lots of satisfaction and happiness. I’m proud to be part of this company and of giving my best as a professional and as an athlete. After everything they’ve given me, I want to give back as much as I can.

How do you feel about the support that company has given you to continue to grow as an athlete?

The support they have given other people and myself with their sponsorship is incredible. Of course, they expect a lot in return, but there are no conditions, and their backing does not depend on me winning a competition. This lets you enjoy the process. I’m aware support like this is rare.

How do you see yourself in the future?

I see myself in this company. They have believed in me, and I have a lot to give back. Also, there are lots of growth opportunities. So I see myself sticking around for many years.

At the triathlete level, I can say this sport is very demanding; but I hope I can keep it up even when I’m old.

In two years, I would like to compete in a full Ironman. I already classified for two Ironman 70.3 world competitions.

If you could meet yourself as a child, what advice would you give her?

I would tell her it’s worth fighting for what you want, no matter the obstacles in your path.

Walking in the direction of the things you want is a daily effort.

When it comes to gender equality, how do you think high-performance sports have evolved?

Since the Vargas sisters and Yokasta, it’s become evident that Costa Rica has a lot of female talent. In terms of gender equality, we see more support going to men, especially in disciplines that are less popular. It requires a lot of work and preparation to compete at a high level and some of the support that makes it possible is lacking for women. So there's still work to be done.

What did you think about women’s participation in the Tokyo Olympic Games?

I learned that the games in Tokyo had the biggest female participation in Olympic history. I think that for any athlete, just knowing that you have qualified and won a chance to participate in the Olympics is a significant step. The majority of Costa Rica’s participation was female, and no matter the final position they achieved, I’m sure they all gave the best of themselves.

Want to join the team?

Are you ready to create the future you want with us? Encora has open vacancies for people who are just as excited about tech as we are. Visit #WomenHackers for more information and available positions.