BUILDING A BUSINESS CASE FOR DEVOPS

It is very easy to get excited about DevOps when hearing about how Google, Facebook, and Amazon have achieved incredibly short release cycles and insane levels of automation in their infrastructures. What rarely gets mentioned is how much these wonders of technology cost. The tech giants have virtually unlimited funds to invest and can obviously afford the luxury. The rest of us, however, need to fight for our budgets and choose very wisely where to invest it.

Over the course of the past 20 or so years, techniques that since 2008 are called DevOps have helped accelerate and transform the development of software products. In this article I will discuss how it helps businesses deliver more value to their customers and increase the efficiency of engineering and operations’ teams. I will also provide a list of points to be considered when developing a business case for the implementation of a DevOps initiative since it is a significant investment.

This article is targeted at business managers who would like to understand DevOps conceptually, and at engineering and operations managers who need help articulating the business value of DevOps to business leaders.

At a high level, the objective of any business is to identify what their customers need and to create products and services that satisfy those needs. In software organizations this is equivalent to identifying one or more challenges faced by the customer and then developing a software product that addresses those challenges.

In between the Customers and the Dev Team there are two critical paths that lead to the creation of value. The first path, going from Customer to the Dev Team, identifies challenges, prioritizes them based on the organization’s strategy, and creates plans to address the chosen challenges. The second path, going from Dev Team to Customers, takes the software created by the Dev Team, deploys it to a place where the Customers can use, maintains the software, and optimizes the entire process – improving customer experience, increasing efficiency and decreasing costs. 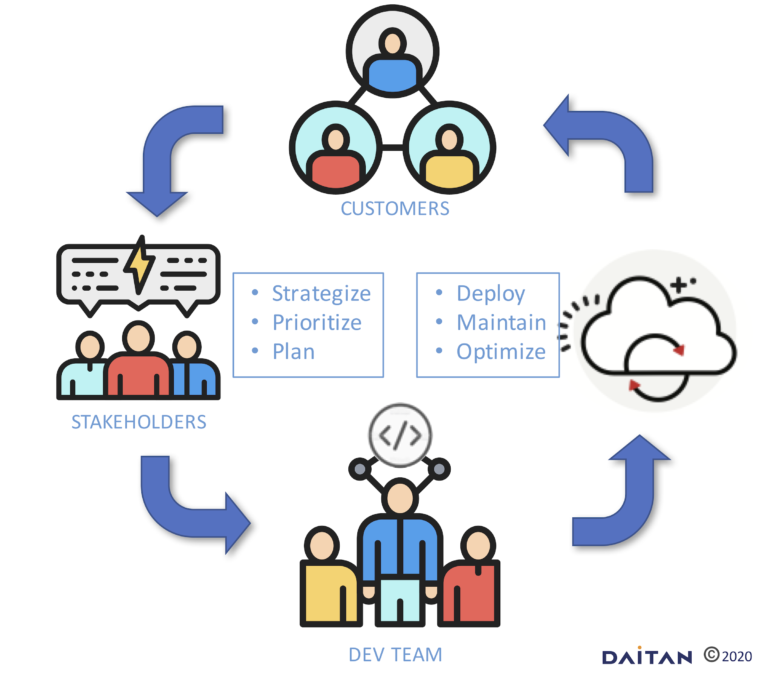 Pathways of value creation between Customers and Dev Team

The definitions of, and distinction between, Agile and DevOps, is a point of debate so read the next paragraph as my interpretation of the current state of affairs. Looking at the value creation diagram, Agile processes optimize the left side of the diagram (customer challenge identification, strategy, prioritization, planning) and the development process itself. DevOps optimizes the right side of the diagram (deployment, maintenance and optimization). The Dev Team is at the juncture of these two streams and plays a critical role in both creating and delivering value to the Customers. 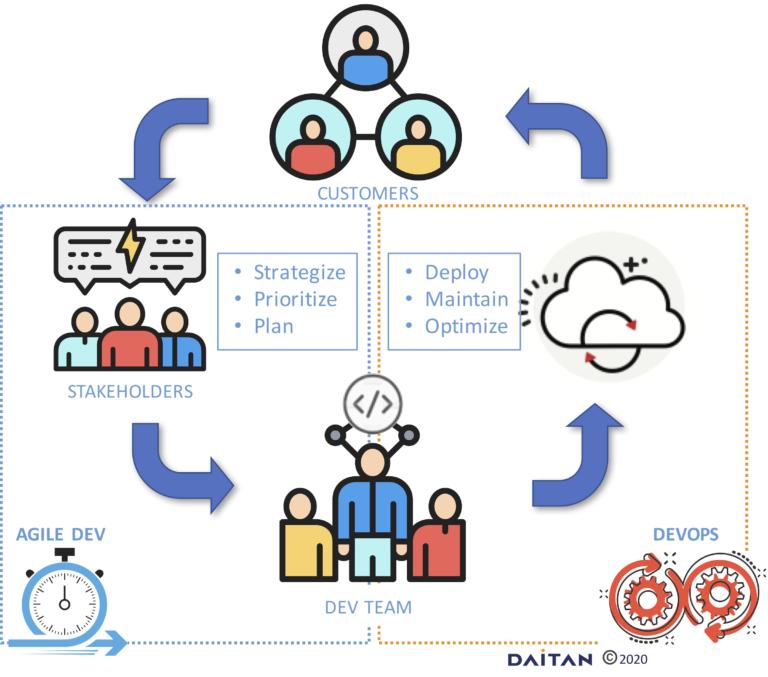 The Dev Team is at the juncture of both sides, playing a critical role in creating and delivering value to Customers.

To understand DevOps it is necessary to understand what happens to software after it has been written by the software development team, processes usually called Integration and Deployment. The diagram below shows a simplified flow of all steps that are taken to bring that software to customers, or a.k.a. to deploy the software to production.

Keep in mind that this process varies much from organization to organization and can take many different forms and the diagram above is an example used to illustrate a concept. A quick overview of the steps:

With this process in mind, it is time to look at the definition of DevOps (even though a formal definition does not exist). According to Gene Kim:

“It’s really about enacting technology practices and architecture that help organizations create a very fast—or even continuous—product flow, from dev through testing through operations, all the way to deployment, while often increasing reliability, stability, and security.”
Source: Tech Beacon – Benefits of DevOps

In practice, this broad unofficial definition of DevOps is achieved by automating most or all the steps in the Integration and Deployment pipeline and by creating a culture that values short feedback loops, automation over manual work, and customer satisfaction above all.

A Business Case for DevOps

A business case for the implementation of DevOps needs to take into consideration the benefits that DevOps will bring to the organization, as well as, the costs of such an initiative.

Considering the following points when assessing the benefits of DevOps for your organization:

Consider the following costs when creating a business case for your DevOps initiative:

As I hope I have shown you in this short read, DevOps is a critical characteristic – and some will argue vital – of modern software development organizations as it enables them to increase user satisfaction by increasing the quality of their software and the velocity of their software release process. I also hope that the cost analysis structure I provided will help you estimate how much you will need to invest in your DevOps initiative and to decide how much or how little DevOps your budget will support.