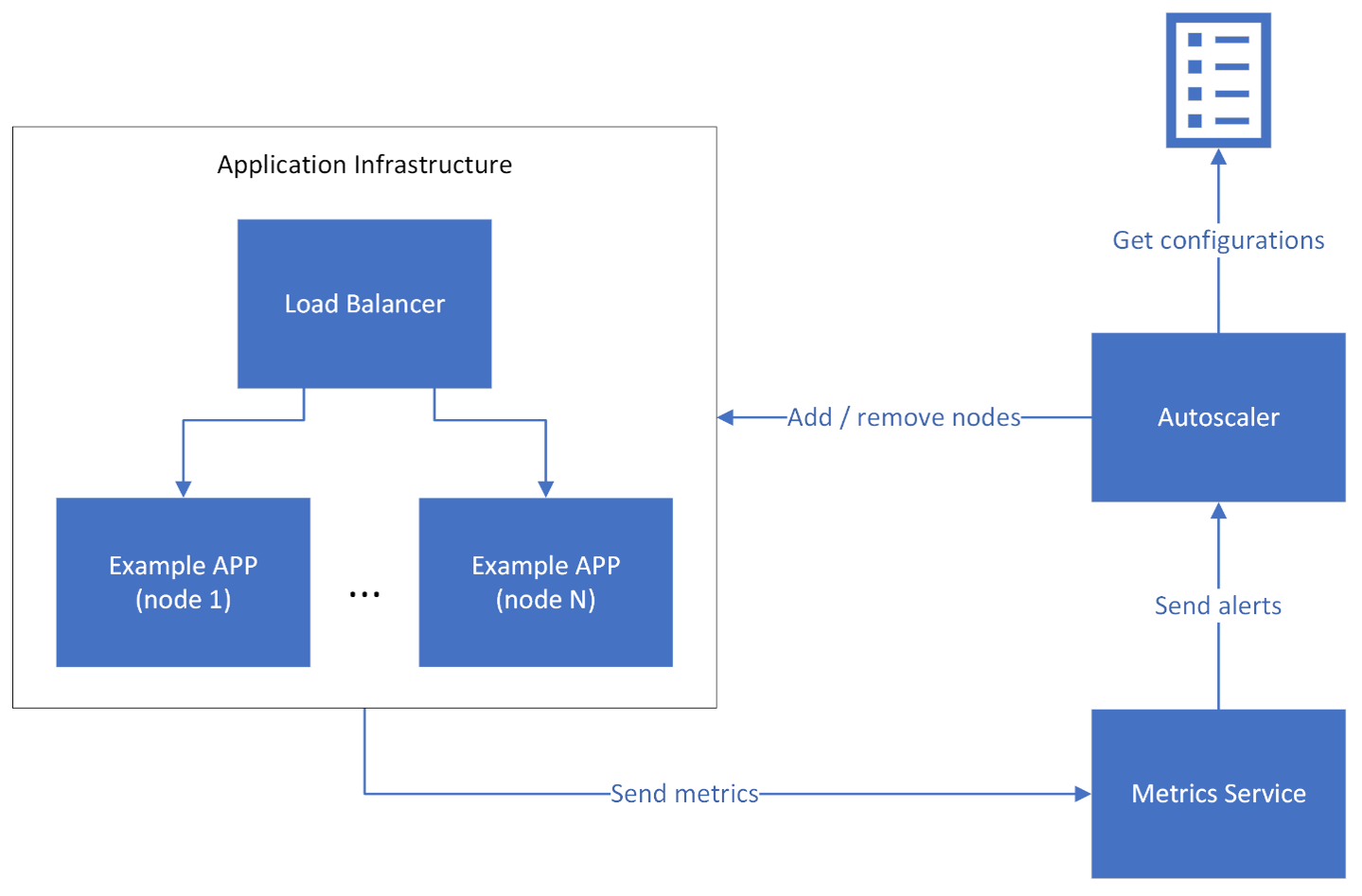 When more and more users start using a system, horizontal autoscaling can be used for improving performance and keeping the system stable, but it’s not so simple to configure as it appears to be.

In this context, with a technological agnostic point of view, this article aims to define horizontal autoscaling with some examples, and to discuss best practices to configure autoscaling with effectiveness.

Horizontal scaling (or scaling out) is the ability to add or remove instances of an application. Horizontal autoscaling means to do this process automatically.

The autoscaling process works by adding or removing application instances, as a result of metric alerts and/or scheduled actions.

Figure 1 shows an example to understand how this process works with more details:

Some components are represented simpler than they really are, because the focus here is to discuss the autoscaling process, not other aspects. Here is a quick description of each component:

Let’s check some examples to get a better understanding.

With this configuration, when the Autoscaler receives a metric alert of average CPU utilization equal to or above 75%, it instructs the Application Infrastructure to add one more Example APP node. If there is a change in the number of nodes, new changes will only be able to happen again after 1 minute (due to scaling cooldown). Otherwise, changes can happen in the next metric alert of average CPU utilization.

This is a scheduled configuration, very useful when it’s already known the traffic will increase a lot during a specific time range. In this example, the Autoscaler will instruct the Application Infrastructure to keep 10 nodes during the time range. Before and after it, the Autoscaler will use the other configuration already in-place, with a minimum and maximum of 2 nodes.

After defining horizontal autoscaling with some examples, let’s discuss some best practices to configure it. Some of them are more related to the application than the autoscaling itself.

Load Balancers usually use a health check endpoint to identify when it should start/stop sending requests to a given application node. If the node is healthy, requests are routed to the node, otherwise not. However, note that when a node has just started, if the health check returns success and there are still resources being loaded, the clients can receive errors.

It’s important to notice that more sophisticated Application Infrastructures like Kubernetes have more types of health checks. For example, Kubernetes has three: liveness, readiness, and startup probes. Each one works in a different way [2]:

More details about Kubernetes probes can be found here. For Kubernetes and other cases, it’s important to understand and properly configure the health check types to prevent autoscaling issues.

Ensure your application has a graceful shutdown configured, otherwise some requests can be interrupted abruptly when the number of nodes are reduced. The results can be errors thrown to the client, or even inconsistent data related to the request.

In most cases, mature frameworks already do this, but developers should double check this configuration and also ensure resources are properly closed when the application shuts down.

In addition, some Load Balancing implementations (like AWS Application Load Balancer) allow  setting a connection-draining time. This configuration sets a timer for the application node to finish processing the current requests. This happens after the node becomes unavailable for new requests and before a complete shutdown.

Use an Appropriate Load Balancer Configuration

Round robin - chooses the instance in a circular order

Least connection - chooses the instance with the fewest active connections

In addition, there is another useful configuration called sticky session. With this configuration, the Load Balancer makes a client (or a group of clients) always hit the same application node, only choosing another if that initial node becomes unavailable. Behind the scenes, the Load Balancer uses the IP address or another specific information (such as cookie, header, etc.) to decide which node to select. This is specifically useful when you have stateful applications that store session information, a situation you want to avoid, but sometimes is not possible.

It’s important to note that a bad Load Balancer configuration may end up adding more instances than necessary or even reducing instances when it’s not ideal. The reason for this is if the load is not well distributed among the instances, the metrics will reach the autoscaling thresholds prematurely, which makes the Autoscaler triggers changes in the number of instances before it’s really needed.

Be Careful with Stateful Applications

During autoscaling, keeping a consistent state inside the application nodes can be a challenge. Note that a state change in one node needs to be replicated to all others. Consider the following two possibilities:

If the replication is synchronous, you will have guarantees that the data is the same among all nodes. However, this process is heavy and can reduce the performance of your application, especially when you start having many nodes.

If the replication is asynchronous, you will have less performance issues, but will have eventual consistency of the state. Depending on the case this won’t work well, because an application node may not have the latest state, and errors can be raised when the client hits that server. Some ideas to reduce this issue include configuring a Load Balancer sticky session and adding retries in Load Balancer/clients.

So, the first recommendation is to avoid stateful applications. If this is not possible, try to delegate the internal state to an external service (e.g., cache). Another option would be to store the data in a JWT token that the client would need to re-send every time (through headers or cookies).

If you really need a stateful application, evaluate the pros and cons about the replication types discussed above.

Understand the Scenario before Choosing the Autoscaling Configurations

Although it’s very common to use a simple average CPU utilization alert metric, it’s better to understand how our application works and which constraints you have before choosing the autoscaling configurations.

Using only the average CPU utilization alert metric can make your scaling triggers go off either too soon or too late, leading to higher costs and waste, or a poor experience for users during high traffic times. Machine Learning or predictive statistics (e.g., anomaly detection) can help a bit, but they are usually not enough, because they don’t reflect the reality of an application.

Below are some examples where using the average CPU utilization is not a good approach when used alone:

In addition to these examples, there can be specific constraints like costs and resource limits, which can affect your choices.

You can also combine multiple alert metrics to have a more effective result. For example, you can use an application specific alert metric to try to reflect the load of the system, and at the same time the average CPU utilization as a contingency for unexpected scenarios.

Note that finding a good autoscaling configuration is an iterative process that requires analysis, changes, and tests. This usually takes some time.

Run Tests to Validate your Configuration

Do not suppose your autoscaling configuration will work well without testing.

It’s important to run load tests against a load test environment with the same configurations as a production environment (CPU, memory, disk, etc.). Also, try to simulate the same request patterns in your load tests, and use twice the load you are expecting.

Don’t try to implement an Autoscaler if you really don’t need it. Although this article focusses on agnostic aspects, it’s recommended to use well-known tools like Kubernetes, AWS Auto Scaling Groups, Azure Autoscale, etc. Also, DevOps techniques like containerization and infra-as-code can help a lot to accomplish autoscaling.

This article introduces some concepts related to the horizontal autoscaling of applications and discusses important aspects to be considered when configuring autoscaling.

It’s not an easy task, but with knowledge and effort an effective autoscaling is possible.

This piece was written by João Longo – Systems Architect and Innovation Leader at Encora’s Engineering Technology Practices group, and Ildefonso Barros – Senior DevOps Engineer. Thanks to Isac Souza and João Caleffi for reviews and insights.